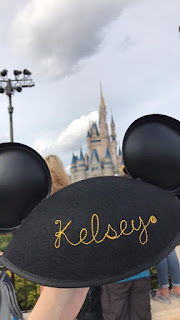 If you know me in real life, you would know that last semester I participated in the Disney College Program at Walt Disney World in Orlando, Fl. Since I came back from Florida, I’ve gotten so many questions about the DCP and the entire application process, so I figured to write some blog posts about it. This will be part one of two, possibly three or four parts because there is so much that I can talk about. But this first post will be about my experience in the DCP and it’s going to be a very long post so I hope you’re comfy and have plenty of snacks.

I applied for the DCP on the first day of applications opening up for the 2016 program on a whim. After submitting my application, I was offered a web-based interview (WBI). I’ll go more into detail about all of this in a different post so just bear with me! I completed my WBI and was then offered a phone interview, which I scheduled for the first possible day. After spending a few weeks freaking out about all of this and not telling anyone that I applied except for my boyfriend at the time, I had my phone interview. On February 25th, basically a week before my 21st birthday, I received an email saying that I was selected to participate in the DCP! After thinking about it over and over, two days later, I accepted my offer, submitted my fees, and picked my arrival date of June 6th. Now came the long wait until I could actually move to Florida and man, it was a longgggg wait.

While waiting to move, I was apart of several DCP Fall/Fall Advantage 2016 Facebook page, trying to find potential roommates. Disney provides apartments for the DCP interns and there are four different complexes, which will be covered in another post. I quickly found 5 other girls that I want to room with – one I went to high school with – and once housing registration opened up, we were able to all link up, which was a miracle since we have spent the past few months constantly talking and even video chatted. We were all so excited to live together in our three bedroom, six person apartment. We got our second choice (which was my last choice) of Vista Way. Vista Way was known as the “party complex”, which didn’t really phase me until we were the ones having parties (mostly without me knowing that there was going to be one). At first, living with everyone was great. We all had fun together until all of our true personalities came out. Some of us wanted a clean apartment, some didn’t care if there were dishes in the sink. Some of us had issues with the loudness, while the others found it to be okay. Two roommates out of the original group moved out. I was on the verge of moving out too but decided to just stick it out. It was hard to have six different personalities and expectations all cooped up in one apartment but we tried to make it work and to this day, I’m still friends with a few of them. A tip for the incoming DCP interns, make a chore chart and stick to it so you won’t have the same problems we did. It sucked being the only one to clean a bathroom that was shared with three other girls. 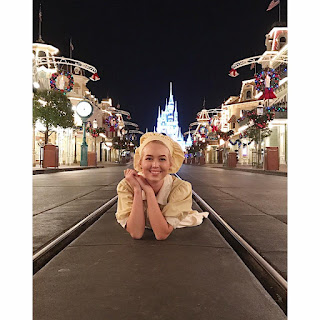 Now onto the job. I was offered a merchandise role and once I arrived, I found out that I would be working on Main Street East in Magic Kingdom. I was so excited to be in Magic Kingdom but was kind of bummed to find out that the Emporium (which is where I thought I wanted to work), was on the west side of Main Street and not the East. I learned that Main Street East was The Confectionery, Chapeau, Box Office Gifts, Uptown Jewelers, Cinema, Curtain Call Collectible, and the two carts that were right after you walked under the train station. I fell in love with Main Street East and was so happy that I was placed there instead of the other side. I learned a lot of cool things like making cotton candy, embroidering hats which was one of my favorite things, and watch sizing. After spending a lot of in my brown costume (the costume used for everywhere but the Confectionery), I somehow ended up working in the Confectionery for the last half of my program. I lived, eat, breathed that yellow costume and rocked that yellow bonnet with pride. I learned to love the Confectionery until towards the end of my program. It was holiday season and we were so busy all the time, especially at the end of the night. If you work on Main Street, your shops stay open for an hour past park close since people might want to do some last minute shopping. There were a lot of mental breakdowns at work, too many tears at the water cooler, mysterious illnesses, and so many times where I just wanted to quit. The parts that made my job great though were my fellow cast members, especially the other CPs, the international students, and the part-timers. It became so easy for me to make friends with so many people in a short amount of time and I couldn’t be more grateful for them to be in my life, which a lot of them still are. I’ll always remember all the times going to Ale House, IHOP, or Waffle House after work and just being goofy with them. I miss hiding in the Confectionery stock room, sneaking out to the back to watch the fireworks, dancing along to all the parades that went right by us, and getting to take treats from the Confectionery home on certain nights. There was no better feeling than walking outside once the park was all clear and seeing the castle lit up, realizing that this was your normal life. 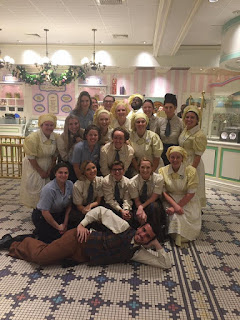 Outside of work, I spent a lot of time playing in the parks, going to Universal, a few beach trips, going out with my friends and roommates, and even managed a trip back to school for homecoming weekend and a weekend back home. It felt so good to go to the beach in the middle of November while all your friends back at home and school were miserable in the cold. I wish I took more advantage of the fact that I was living in Orlando. There is so much to do and so much to see, which is part of the reasons why I want to go back. The worst part of my time down there though was when I got into a three car accident and almost totaled my car in the beginning of January. I was going to pick my parents up from their hotel which was down the road so we could go about our day. I was merging lanes and got sideswiped even though I looked and was all clear, swerved, and collided with the car in front of me. It was absolutely traumatizing but luckily my parents were down the road and were able to get to me quickly. I felt so terrible though because my mom and stepdad were excited to spend the day with me in Epcot since we didn’t really get to enjoy it when they came in September. No one was hurt in the accident and I was able to go back home a few days later since my program had ended.

When I came back to school, I was thoroughly convinced that I didn’t want to go back to Disney based on what happened that last month of being there. But then I grew to miss it more and more every day. I miss my people, I miss making magical moments, and I miss being in my second home. So I ended up applying for the DCP again, the summer alum program, and several professional internships. Right now, I’m heading back to Disney for the summer alum program but I just had some interviews for a few professional internships – one being my absolute dream internship – which I’m really hoping I get an offer for. I’m so ready to go back to my second home, reconnect with some of the greatest friends I’ve ever made, and (hopefully) start a legit career down their in the near future. Like Walt Disney said, “All our dreams can come true, if we have the courage to pursue them”. So here’s to pursuing my dream.

My name is Kelsey Lynn and I reside in sunny Orlando, Florida. I have a love for all things Disney, cats, fashion, Lilly Pulitzer, wine, and travel.

Welcome to my blog!

I'm so glad you're here! My name is Kelsey Lynn and I reside in sunny Orlando, Florida. I have a love for all things Disney, cats, fashion, Lilly Pulitzer, wine, and travel.

I still can’t believe the love of my life asked

Kelsey Andersen has a nice ✨ring✨ to it! I can

I’m pretty sure pizza, especially the crust, is